Dáithí Sproule of Derry, whose first group was legendary Skara Brae, has lived for many years in Minnesota.

Dáithí was one of the first guitarists to develop DADGAD guitar tuning for Irish music. As well as playing and singing with Altan, he has performed and recorded with two highly influential traditional music trios; Bowhand (with James Kelly and Paddy O’Brien) and Trian (with Liz Carroll and Billy McComiskey) and has played on recordings of Tommy Peoples, Seamus and Manus McGuire, Peter Ostroushko, and many others.

In recent years he has been playing with another great trio, Fingal, with Randal Bays and James Keane, and performing locally in Minnesota with friends such as Laura MacKenzie and Jode and Kate Dowling. Dáithí’s original compositions have been recorded by Skara Brae, the Bothy Band, Altan, Trian, Liz Carroll, Aoife Clancy and others.

In 1995 he released his first solo album “A Heart Made of Glass” with songs in English and Irish. In 2008 he released an instrumental guitar album “The Crow in the Sun”, featuring 13 original compositions.

In addition to performing and recording Dáithí is a teacher and lecturer in subjects ranging from guitar styles and traditional songs to Irish language and myth. 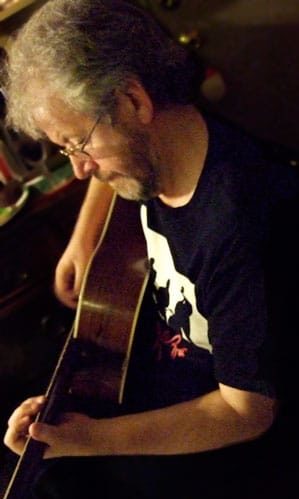