Mairéad Ní Mhaonaigh is a native of the Donegal Gaeltacht of Gaoth Dobhair. Her first language is Gaelic and she has learnt many of her songs from family and neighbours as well as sourcing older material from archive facilities.

She is renowned as one of the leading exponents of Donegal fiddle music and likes to promote the music which she has inherited from her late father Francie, whenever possible. She is a founding member of Cairdeas na bhFidléirí, which was set up 25 years ago to preserve and facilitate the development of the Donegal fiddling tradition for future generations.

Mairéad’s musical inspiration initially came from her family and neighbours, her father being a great fiddle teacher with a wealth of unusual local tunes, many learnt from his mother, Róise. She also received tuition and inspiration from Buncrana fiddle player, Dinny McLaughlin, who was a frequent visitor to her home when she was growing up. Mairéad founded Altan along with her late husband, Frankie Kennedy; from humble beginnings they brought their music to the world arena without compromising the deep musical tradition they loved.

Along with her work with Altan, Mairéad is always in demand for solo work or presenting traditional music programmes on radio or television; past projects include the classic radio show The Long Note and the television series The Pure Drop and The Full Set on RTÉ1.

Mairéad has recorded with other musicians such as Enya, the Chieftains, Dolly Parton, The String Sisters, T With the Maggies, and many more. 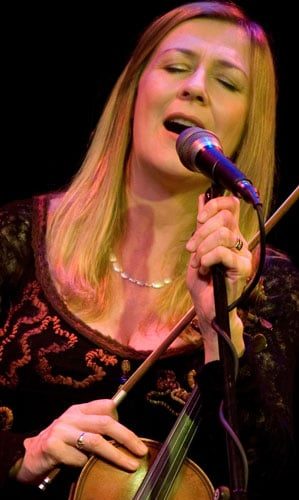